In today’s editorial we will discuss Prosper’s new CEO and Trump’s effect, via policy, technology , rate hikes and cost of capital.

This week, Prosper’s board of directors chose a new CEO.

As we wrote on August 21st Prosper was scheduled to reach a difficult cash situation by the end of this year. In August Prosper’s cash and equivalents were $84mil and at the Q2 cash-spend velocity they were scheduled to run out of cash by end of Q4 2016. We are now in Q4 and we are not aware of any fundraising that would have happened at Prosper since August.

Prosper being a private company we only know what information they are willing to provide. However, because they are a marketplace and lenders do take some, remote and limited to servicing mostly, bankruptcy risk they more or less have to release financial information. We look forward to their Q3 results. Most likely in Q3 Prosper has significantly reduced their cash burn in Q3 by cutting expenses.

We will likely never know why Prosper’s CEO was changed. Most likely different people on the board of directors voted to change the CEO for different reasons. It is common for CEOs to burn out as the official version explains. It is also common for investors to change CEOs of a company when results don’t match expectations.

Regardless of the reasons, we think that a fresh point of view and a new leader may be a good step towards Prosper catching up with SoFi and Lending Club. We look forward to an interesting 2017 for Prosper.

On Friday, November 18th at 10:45 am EST, CNBC interviewed live Noah Breslow , the CEO of OnDeck. During the interview, the stock went from $4.77 to $4.71, not a significant change but a decrease none the less.
The main question Noah was being asked was: If the new administration deregulates banks, will they compete with online lenders more and significantly enough to adversely effect OnDeck , Lending Club, and similar companies ?

Noah’s answer was that online lenders have an edge in their technology which is not affected by any potential regulatory changes. When companies like Cloud Lending Solutions, White Label Crowdfunding and other can provide a whole online lending technology package for $100k I am not sure how much of a tech advantage OnDeck has.

I have never worked at a bank and I do not have any particular insight into how bank executives take decisions. My belief, however, is that banks don’t focus on online lending for a few reasons: capital efficiencies, regulatory risks, and the risk to reward ratio compared to other products.

When banks do focus on online lending it does go really well : Wells Fargo extended $40.7 billion in under 2 years once they started their own online lending operation. In comparison, OnDeck is doing less than $5bil in the same period.

I strongly believe that the capital ratios, and in general bank regulations,  are controlled by international agreements, federal regulators, and state regulators. The administration’s effect on all these regulations will be slow and most likely small.

We also have to keep in mind that, if anything, polarization in the US politics will likely increase. The opposition is likely to be even more binary, and it is very likely that any changes will take a lot of partisan fighting just for the sake of fighting. And beyond the slowness here is extensive research from the authors of Freakonomics showing that a president has minimal effect on a country’s economy.

I believe that the main advantages of marketplace lenders and online lenders are the branding, image, attitude and willingness to do what it takes, with an open mind, to adapt to the modern consumers.

My bank, TD BANK, needs me to come face to face to do an international wire. They do not have offices on the west coast. Therefore to pay a bill by international wire I have to take the plane to the North East. If I send a wire it takes 3 to 5 days, it costs $40, and recalling it is a 2 weeks process (I know, I had to try this once).
On the other side, I can pay via Paypal anybody in the world in less than 10 seconds from my mobile phone, for free. And the recall process is actually usable.

Unless TD Bank changes, I see absolutely no reason to continue doing business with them.

Another question online lenders are likely to get is the effect of rate hikes.
I would like to refer you to these two charts which I think say it all: 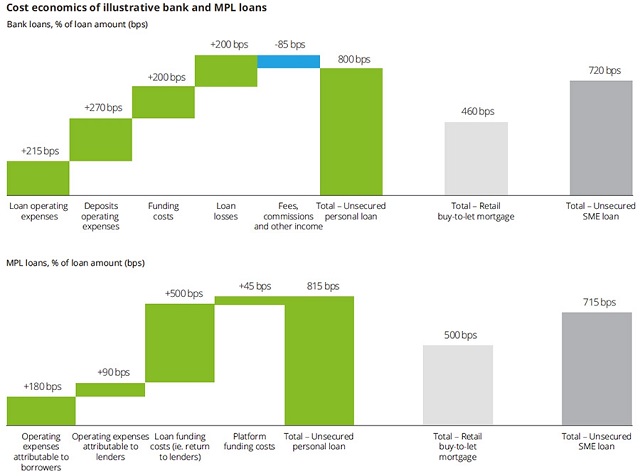